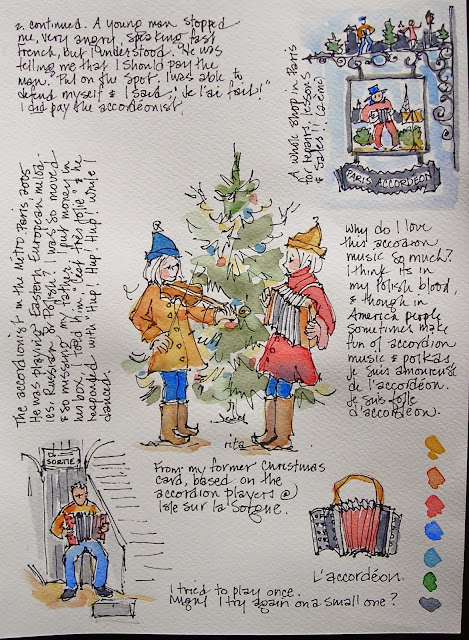 Friday I played a recording of an accordion waltz at my French story time & we, parents, young children, librarian, danced & spun around the room in between stories & rhymes & songs. C'était très agréable.

Today, for my blog, I repeated my exercise where I close my eyes & pick an old travel journal at random. Voilà, I picked one with a page describing a 2005 experience I'd had in the Paris Métro. (written on the above page, left side. Click on image to enlarge.)

Searching "accordéon" I came to "Paris Accordéon": It's a shop on Rue de la lune in the 2ème arrondissement that offers repair, lessons & sales. There's a wonderful video. (click here)  I listened to it en français taking dictation. The monsieur described, played, explained. Several thoughts that I noted (Please excuse errors in my French):

He talks about an accordion revival in France in the 90's due to a group of popular singers, & how its history is one of dance music...of how people find old accordions in their basements or attics, ones that belonged to their grandfathers. He talks about how accordion music has found its way into jazz & rock....

It's accused of being sentimental music & some people mock it as well as Polkas. But, I'm trying not to care. My passion for accordion music is deep in my Polish blood...

Some years ago I was surprised by an accordionist playing on the streets of The Old Port in Portland: Joe Therriault. I invited him to play at a celebration at our library. It was his CD that I played for the children last Friday. Through the Internet I just learned that he died in 2007 at age 82, & I'm grieving a bit... Like the accordionist in the Paris subway, we had a nice communication, performer & audience sharing a passion. That year I also hosted an accordion festival in conjunction with the French conversation group that I used to lead. During a festival workshop, I held an accordion & tried to play a little...pas facile!...I'm wondering, is it too late to be able to learn on a small one...?

I guess I'll have to go to Paris Accordéon to find out, n'est-ce pas?