The Story of the Not So Simple Slug 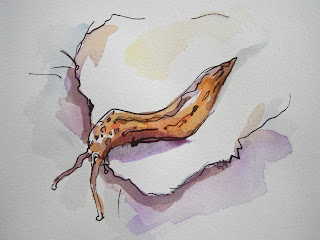 News of the oncoming storm motivated me to clean up a garden patch that’s been weedy for a long time.  In pulling up overgrown rocks I noticed a 7 inch slug moving slowly over a flat rock. My first reaction: Eeeeeek!! Impulse to toss it, kill it, destroy it, (or run). But having read & loved The Sound of a Wild Snail Eating by Elisabeth Tova Bailey I engaged my brain, & understood that it wasn’t going to hurt me. Fear turned to curiosity. After twice going round the surface of a flat rock it slithered down to a lower rock & then crawled there for awhile. Curiosity turned to compassion & even remorse: I suspected that I had uprooted it from its home underneath one of the rocks.That awareness came from having read Suburban Safari by Hannah Holmes. The suburban lawn is a complex habitat chock-full of interdependent life forms!

So I decided to get the facts, ma’am: The slug’s silver slime helps it to crawl & protects it from sharp objects. The slime trails guide it back to it’s tunnels (except in this case I had probably wiped out his trail & maybe his tunnel, oh dear...) the slug has light sensitive eyes on the end of the long tentacles, but it mostly relies on smell to get around. They need dampness & could dehydrate if caught in windy weather. I was relieved to know that the last time I had checked on “my” slug (compassion turned to possessiveness, interesting...) he was back in the soil, so during the winds of hurricane Sandy’s edge he was probably protected.

Just the facts, m’am, but facts are dependent on who is presenting them & why. I watched a film made by a slug poison bait company. I now learned that the slug is my enemy because it eats farmers’ crops. My protectiveness turned to hatred & brought me back around to my initial fear.

And now? I’m still glad I met the slug & don’t hate it & still find it fascinating.

What a complex world we live in, though, even in relation to a simple slug.
Posted by Sketchbook Wandering