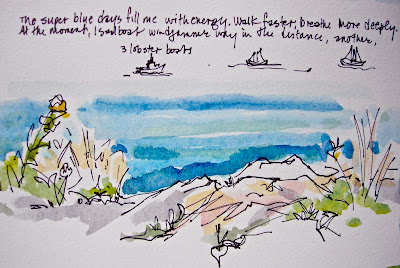 Direct from the sketchbook. No improvements made, no re-do's.... Today I wanted to sketch after my walk, but Hello! I forgot to bring my water, as in WATER-color... So, I'm posting older ones, the first 2 are from last week at Fort Williams Park. 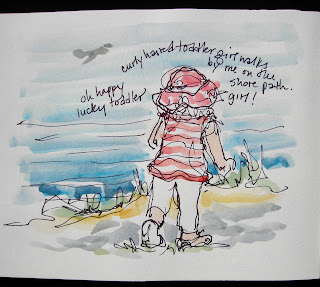 Today I sketched in my mind as I walked: A dog trainer from the company Sit Means Sit, putting a dog through some amazing jumps & commands; a dance between the two, with the lead giving verbal & visual cues, eagerly followed by the canine. The athletic canine seemed to be loving it with great energy! • Two young fresh, healthy mothers & their tiny new babies, each mom holding their baby close, tenderly close, as they chatted on a bench. •  A senior couple, she helping her mate down some steep steps of the remains of old fort at Fort Williams, he taking them one foot at a time, like a mother & child they were, much tenderness there also. A round, red-faced youngish woman in bright pink tank top, speed walking with her ipod, huffing, but with a set jaw & determined brows. She was definitely sweating, which I'm told is necessary for weight loss. I cheered her & me too, though I'm a tortoise compared to her hare. •  A middle aged man in Bermuda shorts, t-shirt, baseball cap & camera (American Tourist Uniform, even seen in Paris sometimes, Horrors!) asking me if I'd seen a "horde" of young people somewhere on the trail. I hadn't. •  A tourist boat out of the harbor, a trolley out of downtown, both chock full of people pointing & snapping. •   And friendly doggies on leashes, sniffing, sniffing, wagging, wagging, some sniffing me, nudging me with their noses saying "I was here." 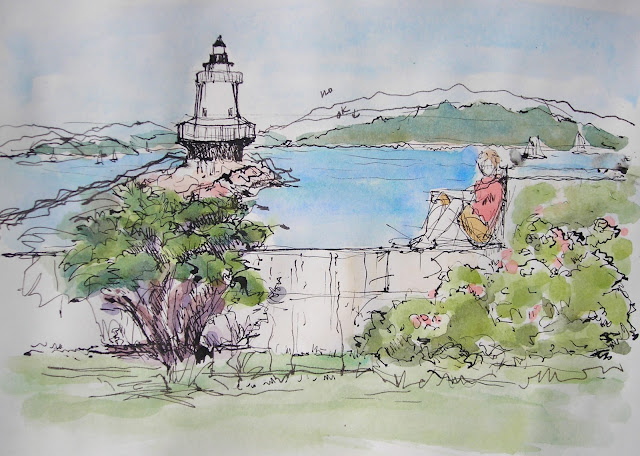 There was a time when I used to ride my bike down to the little Spring Point Light on Sunday mornings to visit a friend who ran the small museum there. The museum is gone, but my memories & sketches of those visits remain. 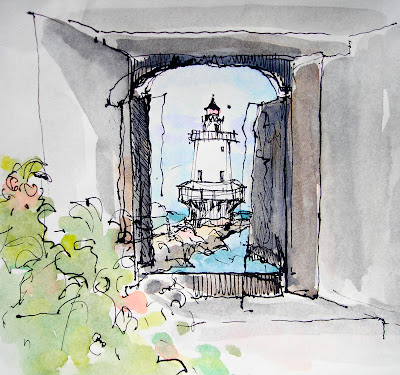 At Spring Point one can wander around remains of Fort Preble. It was built to enforce Jefferson's Embargo Act in 1808. I find that using it to frame up sea views  is much more pleasant than housing soldiers with guns. But that's just me. 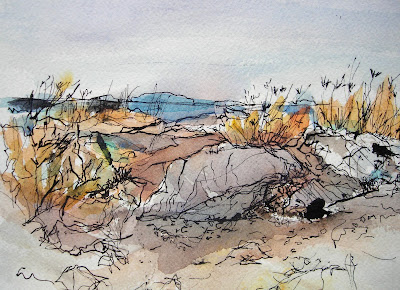 Several autumns ago, on a wet afternoon I sketched at a spot near The Lobster Shack where you can wander on the rocks. Autumn, that wonderful season of change is approaching. But for today, it's still full (& glorious) summer.
Posted by Sketchbook Wandering