Frisbee by the Harbor 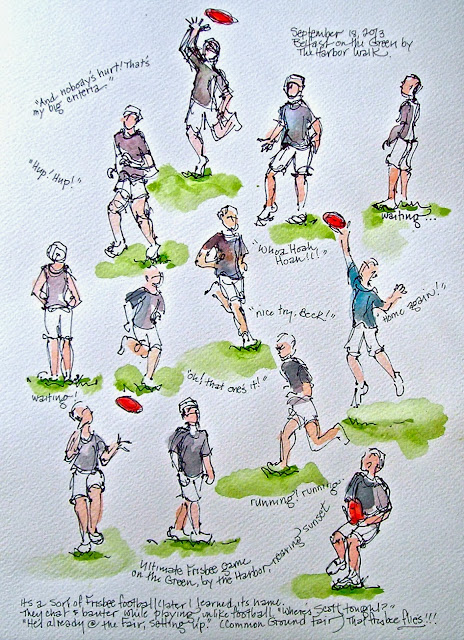 Drawn from my sketches & Internet photos
Yesterday, along the outer harbor, going toward town: My sketchbook & I landed on a bench to listen to a fiddler who later told me he hopes he brings folks, including boaters, a little joy along the shore. I told him he'd brought me a lot of joy! After he left I focused on the obvious boats in front of me, but eventually I tuned in to young, mostly men, tossing a frisbee behind me. Eventually I realized they weren't just tossing, they were playing a structured game, which I overheard was "Ultimate Frisbee". I recognized elements of football, but here players were also bantering, laughing & calling comments to each other. When 2 "opponents" fell trying to catch the Frisbee, I heard some one call: "And nobody's hurt! That's MY big criteria!"

Check YouTube to see some gorgeous moves in this sport. You won't believe how far that Frisbee flies in the initial toss out!

I'd encountered Frisbees just earlier that day because I'd been searching Hula Hoops, originally made by Wham-O, the company that developed the Frisbee when the Hoop craze of the 60's died down. (Reason for searching Hoops: For another time.)

The Sketch Process: I don't have the visual memory to catch fast action as accurately I'd like, so I used my sketches & referenced online photos to make a composite. The important thing for me, is observing motion as well as feeling it in my body, whether from life or photo. Yesterday my sketchbook & I got into that Zen place (Frederick Franck,The Zen of Seeing). Nothing else existed but the present moment, down by the water. (One thing I didn't sketch was the sweet scent of the Rugosa Roses, now full with fruit...)
Posted by Sketchbook Wandering